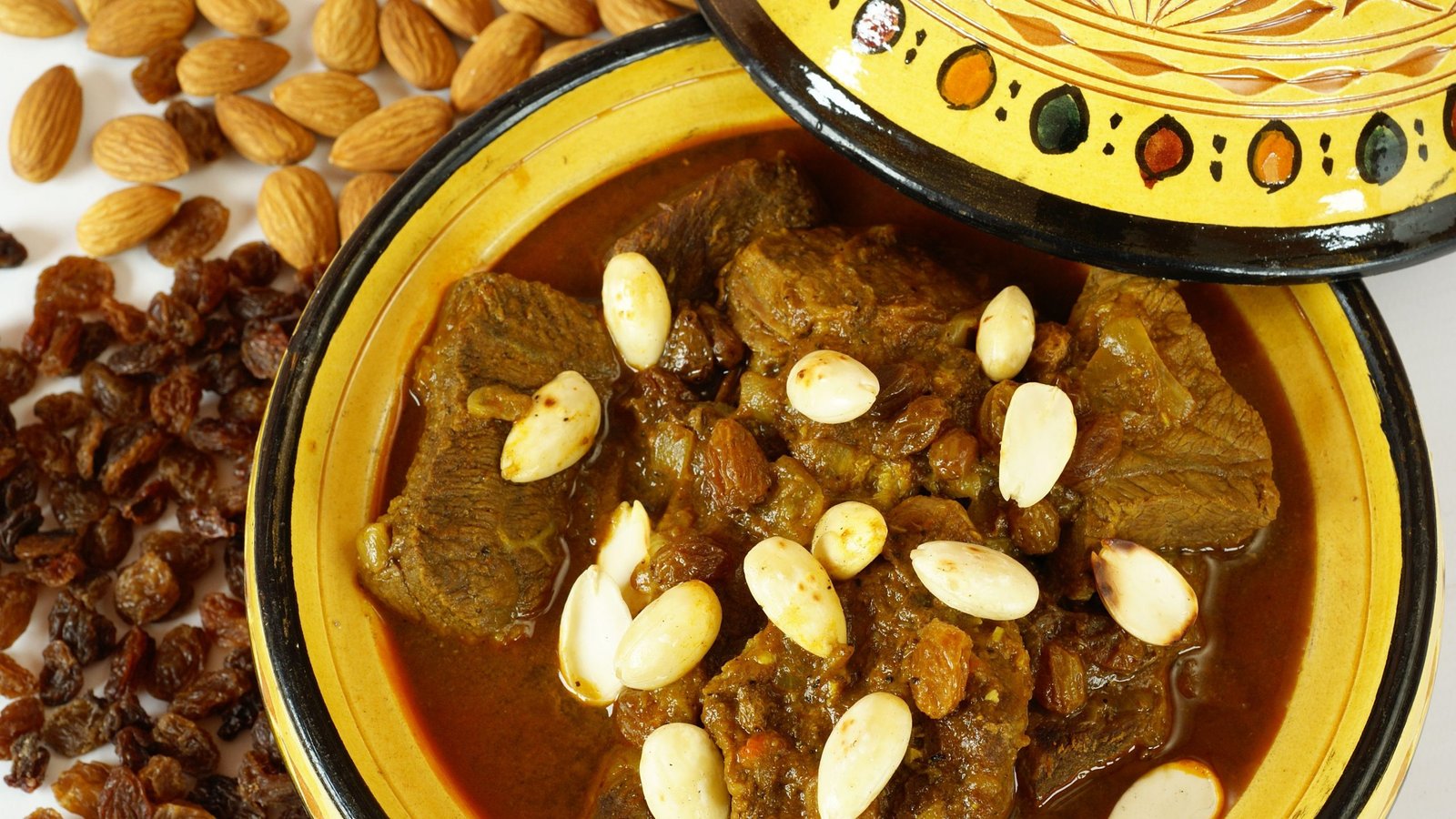 Moroccan cuisine is very rich with all sorts of dishes. Its richness is the fruit of a long history where many cultures, not necessarily Moroccan, mingled and came together leaving a delicious trace of Moroccan dishes behind.

This trace is translated into all the Moroccan goodies like Moroccan Royal couscous, Pastilla, tagines, Briouat and so on. The Moroccan rich cuisine gathered influence from dishes coming from different cultures like the Romans, Berbers, Arabs, Andalusians, and Ottomans just to name a few.

So how can it not be a mouthwatering dish?

Marouziya: A Dish Worth the Wait!

Marouziya is one of the plates that mark the Moroccan cuisine. It is an international dish since each country (Tunis and Algeria for example) makes it differently. Moroccan Marouziya is better cooked in a tagine.

In Morocco, Marouziya is not a dish you would serve a guest. Usually, on such occasions, we would serve a meat tagine with prunes. Marouziya is Moroccan’s favorite dish to prepare during Eid Al Adha when there is extra meat to create and invent dishes with.

Children equally to adults share the excitement that comes with knowing that on Eid Al Adha Marouziya will be cooked. What makes the dish even more delicious is the waiting. Marouziya is not served on the first day of this Muslim holiday nor is it served on the second. It is only served on the third day or later depending on each region and its traditions. Sometimes, the excitement drags days after the Eid celebration.

The genius of Marouziya lies in the clashing yet complementary flavors. This amazing dish is both sweet and salty. Its main ingredients are meat, almonds, grapes, and honey. Before we discuss the cooking, let’s go back in time to discover the history of this unique dish and how it gained its fame in Morocco.

The secret of Marouziya’s unique taste lies in its origins. It is a travel dish that was inspired by many cultures and peoples. It is originally from Andalusia. It is said that the earliest documented recipe was found in the 13th century in an anonymous Andalusian cookbook. The recipe was very different. Marouziya was made with vinegar and chicken instead of lamb.

It made its way to Morocco after stopping by Egypt, where black cherries were added. This is how the combination of salty and sweet came to life. Moroccans elevated it to what it has become adding honey and nuts. But even within the country, Marouziya is made in different ways. So what is the oldest Moroccan version of Marouziya?

Marouziya: Our Moroccan Ancestor’s genius Method for Preserving Meat with No Refrigerator!

In the days before the refrigerator was affordable, Marouziya was a dish that could be safely stored for a long time at room temperature. It was a wonderful alternative to preserve meat. The trick lies in the intense seasoning with Ras el Hanout, ginger, honey and added fat.

Marouziya used to be kept in big clay jars for a minimum of two months. The dish lasted long because it cooked on low heat until water evaporated leaving only oil behind. The sauce becomes thick and can, later on, be preserved.

When it cools off completely, the oil becomes fat and saves the meat by creating a barrier that prevents air from touching the meat and spoiling it. Women used to cook almonds along with the sauce. Nowadays, Moroccans prefer to fry them before sprinkling them on the final dish to add a crunchy texture to the flavorful dish. Making Marouziya differs from one region to another. The differences are mild though and the overall taste is the same. That is because all recipes use Ras El Hanout and ginger.

In Moroccan culture, nothing goes to waste especially when it’s food-related. Marouziya was a solution to prevent squandering. The tradition was born with the Fassi people (from Fez) who made Marouziya with whatever meat was left from other dishes. Bones with a little bit of meat stuck to them would later on be gathered, marinated and left until ready to be cooked. That is exactly why Marouziya was not cooked on the first or second day of Eid Al Adha where the cooking of meat is at its pinnacle. In some Moroccan houses, more meat was added to the mixture while in others, sticking to the tradition was favored. It was optional!

In Qasbat Tadla, Marouziya is made with cumin. In Rabat, it is called Maassal instead of Marouziya. The word maassal means very sweet. In northern Morocco, it is called Tahlia. It is made with a concentrated raisin juice called samt mainly because in cities like Meknes, growing grapes and different kinds of fruits gives the cook more options.

Marouziya is one of the many Moroccan dishes that make us Moroccans proud. Mainly because of the feedback we get from foreigners and tourists who have tasted it. Also because of the positively surprised face of those who have just tasted it for the first time.

Marouziya is not just a dish; it is a testimony of the genius of our ancestors which were mainly women. How they managed to make leftovers a famous dish, and how uneducated women came up with a method to preserve meat in a world where technology was still a myth. To all the Moroccan women, chapeau!

Hajar Ben Bouazza
Hajar Ben Bouazza is a 22 years old master's degree translation student at King Fahd school of Tangier. After getting her DUT diploma in "Finance, bank and insurance" from EST, Ecole Supérieure de Technologie, she left her hometown, Meknes. She discovered her passion and love for languages, and decided to pursue her studies in applied foreign languages in the capital of Morocco, Rabat. She graduated valedictorian of her class in 2018, and received the Excellence Award. Hajar currently lives in the white city, Tangier.

One Thought on “Marouziya Recipe: Lamb Like You Never Had It Before”